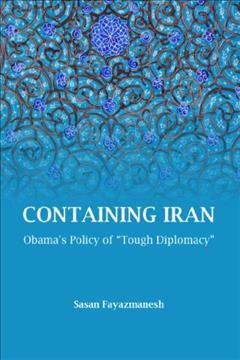 Since the 1979 Revolution in Iran and the end of a close relationship between the US and the Shah, successive American administrations including the Obama Administration have tried to contain Iran by various means, particularly sanctions and military threats. - - Even though President Obama came to office promising to engage Iran, in reality his administration has followed the policy of thtough diplomacy,oe which has included, among other acts, imposing draconian sanctions against Iran. Following the authoras earlier book on the history of containment of Iran and Iraq, the current book examines closely the Obama Administrationas policy toward Iran, as well as the role played by Israel, the European Union and the International Atomic Energy Agency (IAEA) in the implementation of this policy. - - Specifically, it is argued that the policy of thtough diplomacy,oe designed mostly by those associated with the Israeli lobby groups, was intended to give an ultimatum to Iran in some direct meetings, telling Iran to either accept the US-Israeli demands or face aggression. The meetings were also intended to create the illusion of engaging Iran in order to gain international support for aggressive actions. Barack Obama announced this policy in his speeches as a Senator, particularly at the American Israel Public Affairs Committee policy conferences. After he became president in 2008, the policy of thaggressive diplomacyoe was put in motion. While pretending to engage Iran in diplomacy, the Obama Administration, in coordination with the US Congress and the government of Israel, pushed for the most confrontational IAEA reports on Iran and an unprecedented set of unilateral and multilateral sanctions. The US and Israel also engaged in a campaign of military threats, sabotage and assassination of Iranian nuclear scientists. Yet, after four years of hostilities, the policy of thtough diplomacyoe failed to achieve many of its goals and failed to contain Iran. - - -