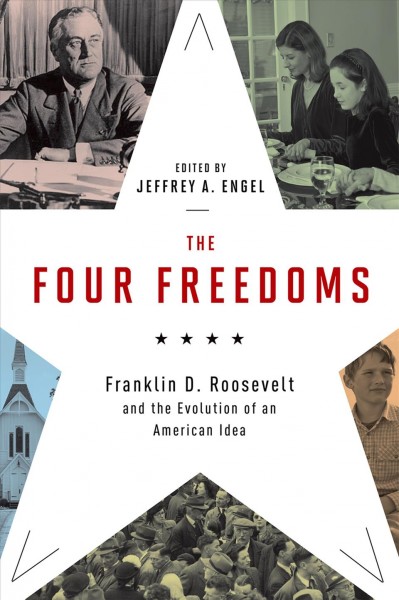 The four freedoms : Franklin D. Roosevelt and the evolution of an American idea /

"The specter of global war loomed large in President Franklin Roosevelt's mind as he prepared to present his 1941 State of the Union address. He believed the United States had a role to play in the battle against Nazi and fascist aggression already underway in Europe, yet his rallying cry to the nation was about more than just national security or why Americans should care about a fight still far overseas. He instead identified how Americans defined themselves as a people, with words that resonated and defined the parameters of American politics and foreign policy for generations. Roosevelt framed America's role in the conflict, and ultimately its role in forging the post-war world to come, as a fight for freedom. Four freedoms, to be exact: freedom of speech, freedom from want, freedom of religion, and freedom from fear. In this new look at one of the most influential presidential addresses ever delivered, historian Jeffrey A. Engel joins together with six other leading scholars to explore how each of Roosevelt's freedoms evolved over time, for Americans and for the wider world. They examine the ways in which the word 'freedom' has been used by Americans and others, across decades and the political spectrum. However, they are careful to note that the acceptance of the freedoms has been far from universal--even within the United States. Freedom from want, especially, has provoked clashes between those in favor of an expanded welfare state and proponents of limited government from the 1940s to the present day. In this sweeping look at the way American conceptions of freedom have evolved over time, The Four Freedoms brings to light a new portrait of who Americans were in 1941 and who they have become today in their own eyes--and in the eyes of the entire world"--