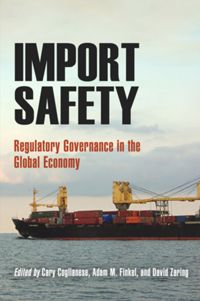 On World Food Day in October 2008, former president Bill Clinton finally accepted decade-old criticism directed at his administration's pursuit of free-trade deals with little regard for food safety, child labor, or workers' rights. "We all blew it, including me when I was president. We blew it. We were wrong to believe that food was like some other product in international trade." Clinton's public admission came at a time when consumers in the United States were hearing unsettling stories about contaminated food, toys, and medical products from China, and the first real calls were being made for more regulation of imported products. Import Safety comes at a moment when public interest is engaged with the subject and the government is receptive to the idea of consumer protections that were not instituted when many of the Clinton era's free-trade pacts were drafted.Written by leading scholars and analysts, the chapters in Import Safety provide background and policy guidance on improving consumer safety in imported food, pharmaceuticals, medical devices, and toys and other products aimed at children. Together, they consider whether policymakers should approach import safety issues through better funding of traditional interventions-such as regulatory oversight and product liability-or whether this problem poses a different kind of governance challenge, requiring wholly new methods